Drive In Cinema have held these unique events in Bents Park, South Shields since 2013, during October/November and February each year. Successfully extending the range and quantity of films we’re able to show every year to thousands of visitors. 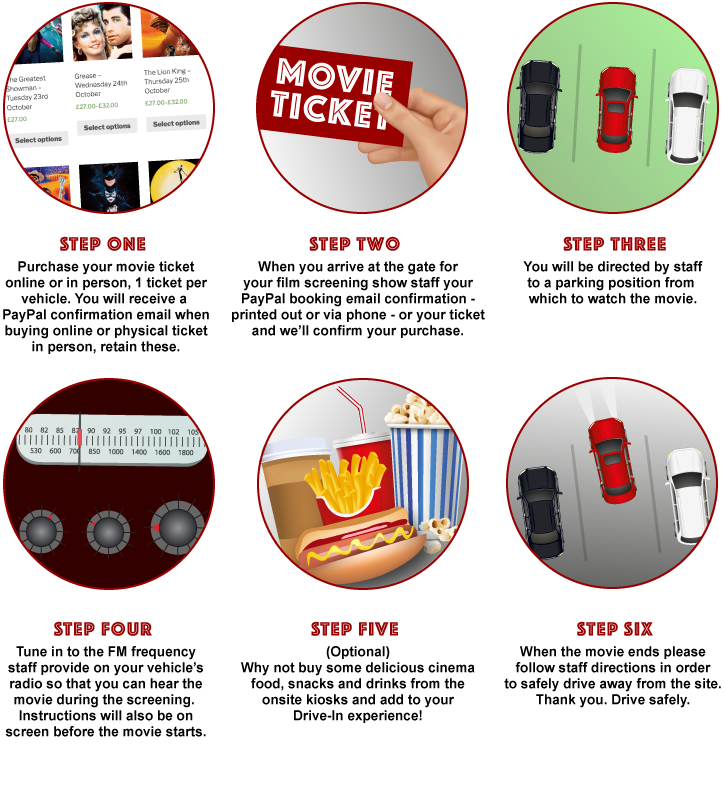 What time do gates open and when does the film start?

Gates open at 5pm – 2 hours before the film start time at 7pm. For sold out screenings the gates will open from 4.30pm

What time do gates close?

Gates close at 6:30pm – 30 minutes before the film start time to ensue everyone has entered, been parked and is settled.

I’m running late does that mean I can’t get in after 6:30pm?

Stewards remain situated on the gate up until the film start time so that any late arrivals may be allowed access however, there is NO ADMITTANCE once the film starts and we do not issue refunds for latecomers or non-attendees.

Are there toilets on site?

Yes there is a dedicated toilet block situated near the entrance gate that is open throughout the screening.

Can we park earlier and leave, returning to watch the film?

Absolutely, you can get your spot, leave for a drink, food or a walk and return to join your vehicle by 6:45pm latest on foot

Can I buy a ticket on the night?

Unless the event has sold out then yes you can. The steward at the gate can advise on what’s available, before you enter, payment for the film on the night is CASH ONLY

Do the food kiosks accept cards?

Yes they do, cards and cash.

Can I bring my dog?

We generally advise against this as film nights can be busy, with moving vehicles prior to films starting and if your dog were to cause an issue with noise for other attendees you could be asked to leave. If it is essential you bring your pet we ask you keep it on a lead when inside the venue and be respectful of other filmgoers.